I went to see Jurassic World last night and as much as it made me feel like I was 8 years old again screaming at the sight of velociraptors jumping out from all sides, I decided it to give it a thorough critique.

When I first saw Bryce Dallas Howard’s character in the movie, I was confused on what year it was. Is it the 90s again? Is John Hammond still alive? Why is it that every business woman in movies has a blunt, no-frills bob cut. Is it to make her look smart and serious? You could have done that with acting instead of an ugly bob and bangs. I’m pretty sure the hair department of this movie used this image of Hillary Clinton, circa 1993 as a reference point of what a serious woman in charge looked like: 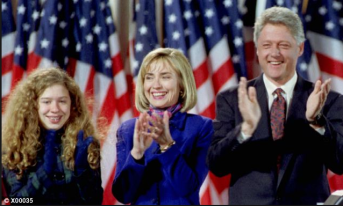 Although hats off to her for having no frizz in the jungles of Costa Rica. I bet she used expensive conditioner.

I don’t know how walkie talkies work, and I don’t know how to splice genes to create extinct animals either. But I am going to take a guess and say that one is a lot harder to do than the other. In the movie, at one point Barry, the non-Chris Pratt raptor trainer, has trouble calling people in on his walkie talkie. How are you going to tell me that this company was able to open an island of genetically created dinosaurs, yet cannot master the difficult science of radio frequencies? Did they decide to cut costs in that one part of the park’s budget and only buy the ones that work within fifty feet of range? Get it together, Jurassic World company.

Yes, we are back on Aunt Claire again. Towards the middle of the movie, Chris Pratt, lion trainer to the dinosaurs, helps Aunt Claire find her nephews and they are running around in the forest (or is it jungle? what is the natural habitat of dinosaurs?) trying to find them. He cleverly tells her that she isn’t going to last a minute running around in her ridiculous shoes, which I agree. But she shows him by running all over Costa Rica in her heels saving her nephews and getting more and more naked throughout the movie. I call bullshit. No matter how well she can run in heels, or claim they don’t hurt her feet, at one point in the chaos her heel would have gotten stuck in a tree branch or some mud and she would have gone flying. I can barely make it down State street in a low heel without tripping over myself, let alone running away from dinosaurs. This is by far the most implausible scenario in the entire movie (and that includes the creation of dinosaurs via mosquito blood, which is totally possible).

Part of the greatness of Jurassic Park (the original) was Timmy and her sister Lex. When you watch it, you feel bad that poor Timmy gets the short end of the stick in every situation (the car in the tree scene, the gate turning on) but at the same time it’s pretty hilarious in that you know it’s not real so it’s funny this kid is limping around like a moron kind of way. And his sister is so cool- she’s a hacker! And a vegetarian! And her name is Lex! The kids in the new movie are dopey and I don’t like them. They are boring, and I’m pretty sure the director thought so too, because he definitely left out any plot ending for the older kid and his girlfriend. What is the older kid’s name even? Who cares, I don’t. I’m not even going to bother looking it up on IMBD, they are that lame. Team Timmy and Lex over here.

In the immortal words of Regina George, that vest was disgusting! It’s so hot in Costa Rica! And Christ Pratt is hot! Why does he have to wear the vest, or a shirt for that matter? Get rid of the stupid vest Chris Pratt! There’s no need! Take a tip from Jeff Goldblum and just go shirtless.

The dinosaurs were really cool though.