Well hello there. I’ve seem to have managed to survive the 2011 disaster otherwise known as

THE WORST MOST DISGUSTINGLY AWFUL STOMACH FLU EVER.

The jury’s still out on whether the thing that tried to kill me was in fact a flu or poisoning of the food variety, but either way I barely escaped as did my friend who I went to lunch (food poisoned lunch?) with the day before all hell broke loose. Two days of fever, chills (stomach flu chills?), headaches, what I will describe as “bathroom antics,” and last but not least, a 5 hour marathon of puking every twenty minutes. It was so bad that at one point I even considered going to the hospital because I was so exhausted from how badly my stomach was trying to exit my body.

But now that I survived and am back to solids, I’m starting to think that having a flu that literally went on from 2011-2012 wasn’t so bad. Allow me to explain:

So while the actual sickness pretty much sucked, it wasn’t the worst thing that could have happened on the last day of the year. Next year I urge you to exchange your champagne bucket for a puke one. (Not really.) 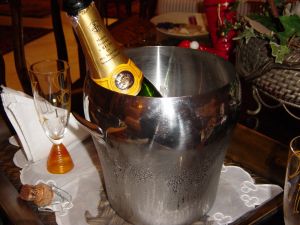