So yesterday, at like 5pm I find out on Twitter that the movie Couples Retreat with Vince Vaughn is having a red carpet premiere that day.  I had no clue what time or where (I actually ran to the Loews in stead of AMC River East, because I was so frantic to get there) but I darted out the door and eventually found it.

When I got there, the carpet and tent were all set up, but there weren’t many fans around yet.  Having no clue what the heck I should do, I stood by some paparazzi and pretended to look important. (Tip: wearing sunglasses helps because it hides the fear of getting caught!) A minute later this guy in a fancy suit walked up to us and was asking the paparazzi who they were and whether they were supposed to be there.  Apparently some PR lady for the event said they could stay there if they stayed against the wall, which was good enough of a reason for the guy.  Then the guy looks to me and asks “who are you, are you with them? what are you doing here?” I paused for a moment, contemplating on whether to run away, but instead half nodded back as if to say, “Pssh, like I don’t have anything better to do right now.” Amazingly this worked and he walked away!  A while later the PR lady, WHO WAS A SAINT, came up to us and said we can stay there because we’ve been waiting and were very good, so as long as we didn’t block the sidewalks we were good to go. AMAZING!  Here was my view (Note, these pics were all taken from my camera phone.  Never again will I leave home without an actual camera. Objects in the pictures were MUCH closer than they appear.) 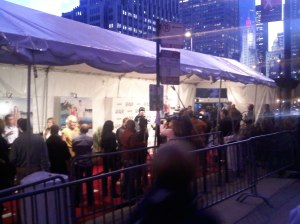 So this was it! I was finally going to meet the love of my life, Babaganoosh himself, Vince he’s-so-money Vaughn.  I’ve been imagining what this day would be like for so long, I was nearly shaking with excitement. There were other famous people there too. I got a picture of Jay Cutler and Greg Olsen, both who said hi as they passed by me (did I mention I was RIGHT next to the door to the theater that the red carpet led up to?).  Today I was googling to see if there were any other people I didn’t recognize (confession, the only way I knew it was Cutler was because people were screaming CUTLER! And I didn’t know it was Olsen until I googled him) and I found out that the short, scraggly looking guy (Peter Billingsly, director) who I didn’t bother to take a picture of was none other than (are you ready for this?) RALPHIE, FROM A CHRISTMAS STORY! If I had known it was him, I totally would have asked for an Official Red Ryder Carbine-Action Two-Hundred-Shot Range Model Air Rifle.

But back to Vince.  I waited around for about an hour when finally fancy cars came up.  And in a flash, he was there! He was tall, and handsome, and dreeaaammmyy!  Here is the video of him walking in. You’ll have to tilt your head to the left, because it would be much easier for you to do this than for me to figure out how to rotate a video. (I’m the one at the very end that says Hi Vince, and I think I said I love you!)

Now, you might think that this was a brush off, and that he simply passed me by, but that’s not where the story ends.  After he walked past the door, one of the paparazzi came up to me and said, “Hey Connie, are you going to put this on your blog?”  And in a flash, Vince DARTED back out, turned to me, and spoke.  The rest is a description of what happened next.

Vince: Wait, did you say Connie? As in C is for Connie, the greatest blog ever?

Me: Why yes, that’s me. Nice to meet you I’m Connie, may I call you Babaganoosh?

Vince: Connie! You may call me whatever you’d like.  I must confess that I am madly in love with your blog and have been searching for you for months.  Please, let me escort you inside.

Me: Oh well, if you insist.

We then went inside and watched his movie. It was ok, but I gave him some tips on what he could have done to make it better. He then insisted on taking me to Harry Carry’s for a late dinner, where we ate and drank beers and he told me how much he loved my blog.  We then went swing dancing (he’s a phenomenal dancer, by the way) and ended the night in a limo ride back to my house, where he walked me to the door.

Babaganoosh: Connie, I’ve had such an amazing time tonight, I love you more than I love John Faverau, even though he’s my bff.

(he then leans in for a kiss, which took a while because he is so freaking tall)

Me: Stop! Vince, I can’t, while you are so money you don’t even know it, my heart belongs to AC Slater.

Babaganoosh: The guy from saved by the bell?

Me: No, that’s my blog code name for my boyfriend, I thought you said you read my blog?

Babaganoosh: But Connie! I can give you the world! I already called Oprah when we were in the limo and asked her to close down all of Grant Park for our wedding! And the reception is going to be held inside Wrigley Field! Please Connie, marry me, I beg of you!

Me: Sorry, I can’t. Now please go before I change my mind.

Babaganoosh: Farewell Connie, I will always think of you fondly.

Me: Farewell, you motorboating sonofabitch.

A single tear fell from his cheek, which conveniently watered my entire lawn.  Did I mention he’s gigantic?

And there you have it, the story of how I turned down Vince Vaughn.  All I can say is AC Slater owes me BIG time for this. Our anniversary is coming up, I’m expecting a case of diamonds.

Now here are some lovely pics of the night, enjoy!

4 thoughts on “How I turned down Vince Vaughn, aka Babaganoosh”